The idea of a CDN is essentially to have multiple edges in different locations of the world which caches all the static content so that it can be delivered from the customers closest location. We intend to integrate CDN such that people hosting applications through us can use CDNs to improve their static asset delivery.

With E2E’s CDN, you can take the initial steps to speed up the delivery of your static content (for example images, JavaScripts, Style Sheets and many others). With E2E CDN, you can guarantee your viewers a fast, reliable and safe experience across the globe. To create CDN with E2E, please follow the following steps:

How to Create a CDN¶

Navigate to the CDN page on MyAccount¶ 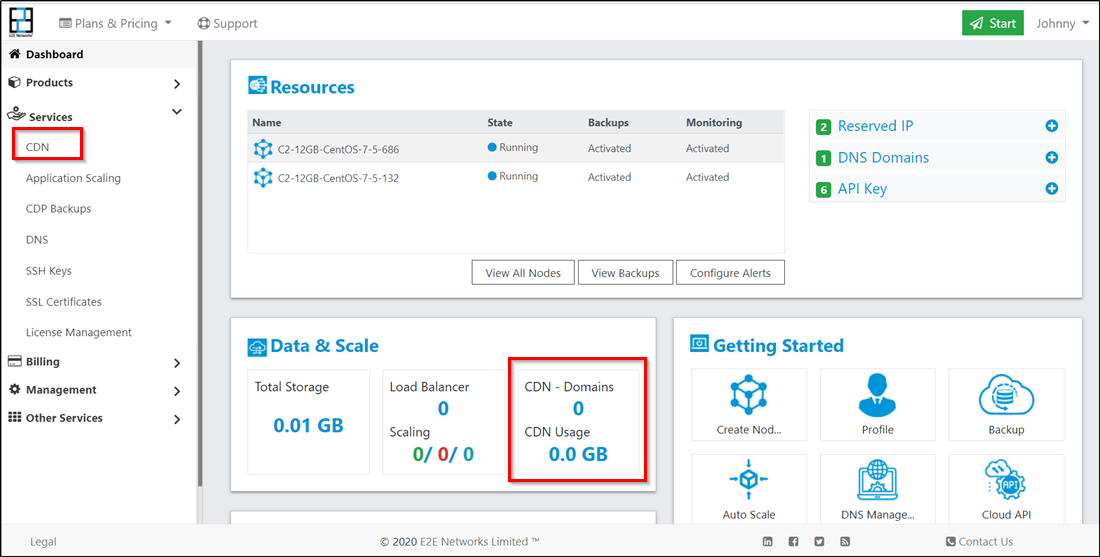 It is the DNS domain name of HTTP Server or E2E Object storage bucket from which your static content gets delivered. For example, xyz.abc.com / abc.com. The files in your origin must be publicly readable. E2E CDN will contact this origin for the content requested by the user if not found on CDN edge server cache.

It is the path of the folder or directory from where the content should be delivered. CDN appends the directory name to the value of Origin Domain Name when forwarding the request to the origin. If the content from this directory fails which, CDN will give a “Not Found” response to the user.

After creation of CDN distribution, it will take upto 30 minutes to deploy the configuration changes on the CDN Edge servers.

This signifies that the configuration changes deploy is In-progress on the CDN Edge servers and the CDN is inactive, the requests will not be served through the CDN Edge network. 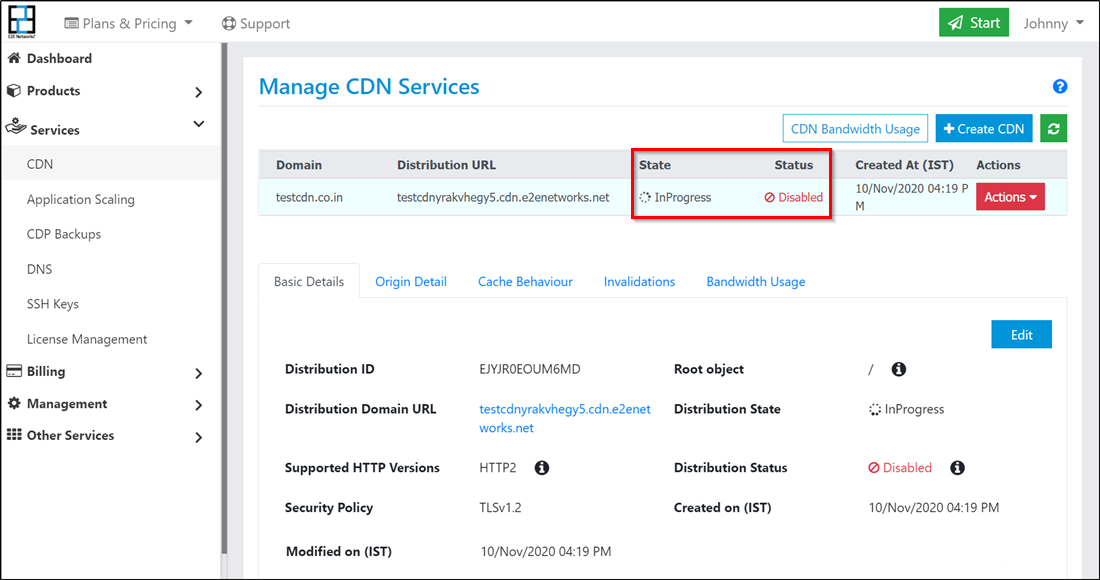 This signifies that the configuration changes deployed on the CDN Edge servers and the CDN is active, the requests will be served through the CDN Edge network.

There are 5 types of settings that a user can check and update for any CDN:

In the Basic detail tab, you will get to the general information about your CDN which are the default settings and you specify during the creation/updation of the CDN. Click on Edit button to update the basic setting of your distribution.

In general, configuring CloudFront to communicate with viewers using HTTP/2 reduces latency. You can improve performance by optimizing for HTTP/2. For more information, do an internet search for “http/2 optimization.”

When you create or update a distribution, you provide information about one location—known as origins—where you store the original versions of your web content. E2E CDN gets your web content from your origins and serves it to viewers via a network of edge servers. Each origin is either a storage bucket or an HTTP server, for example, a web server.

You would not be allowed to delete an origin and currently, the single-origin can be used to create E2E CDN distribution. When you create or update a distribution, you specify the following values for the origin. Click on Edit button to update the origin setting of your distribution.

For HTTPS viewer requests that CDN forwards to this origin, your origin server must match the domain name that you specify for Origin Domain Name. Otherwise, CDN responds to the viewer requests with an HTTP status code 502 (Bad Gateway) instead of returning the requested object.

The default timeout is 30 seconds. You can change the value to be from 1 to 60 seconds.

If you want to increase the timeout value because viewers are experiencing HTTP 504 status code errors, consider exploring other ways to eliminate those errors before changing the timeout value.

For the Origin Keep-alive Timeout value to have an effect, your origin must be configured to allow persistent connections. 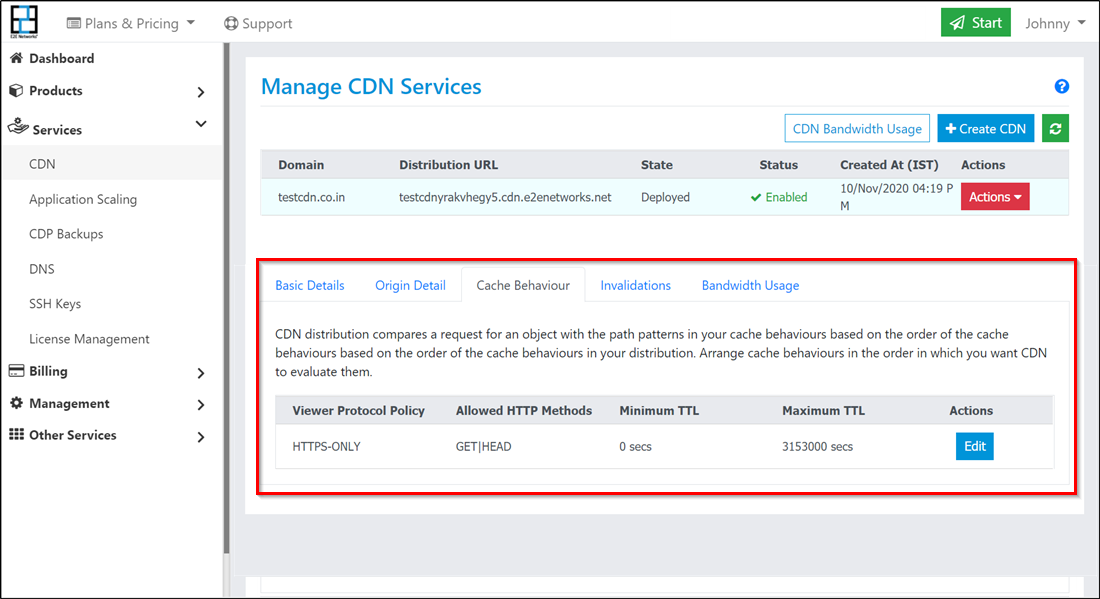 If you need to remove a file from CDN edge caches before it expires, you can do one of the following: 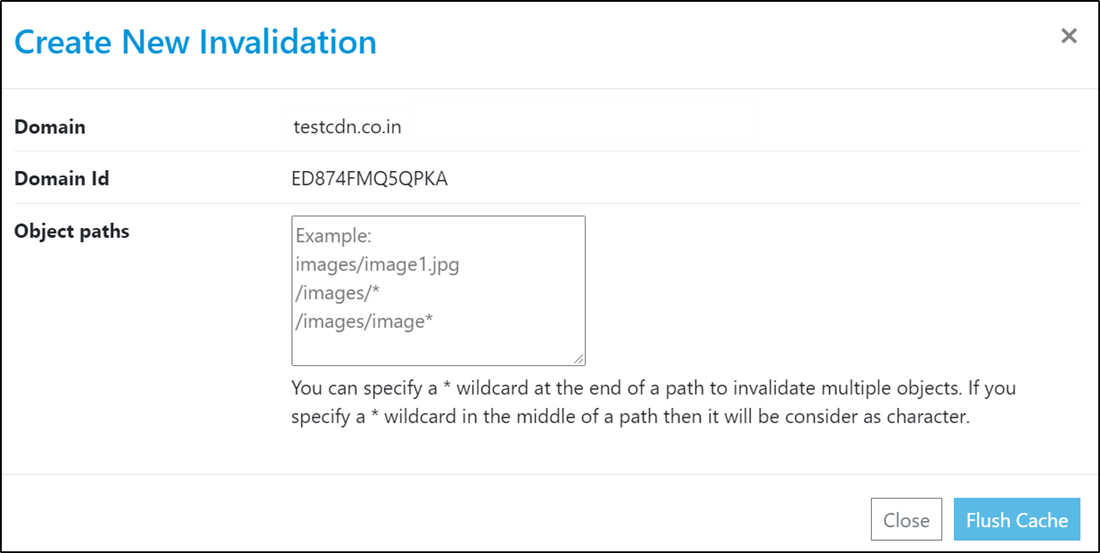 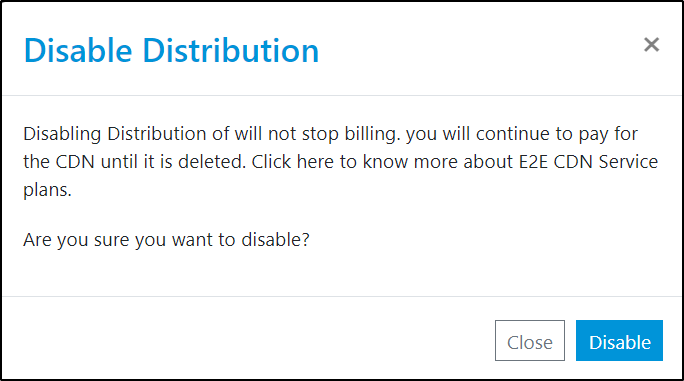 It takes approximately 30 minutes to deploy the configuration changes to all the CDN Edge servers. Once the changes are completed, the state of CDN changes to “Deployed”.

It takes approximately 30 minutes to deploy the configuration changes to all the CDN Edge servers. Once the changes are completed, the state of CDN changes to “Deployed”.

To delete the CDN, your CDN should be in “Deployed” state with “Disabled” status. Else, you will not be able to delete the CDN on any other state and status.