SSH Tunneling to Connect with JupyterLab¶

SSH Tunneling with a Mac or Linux¶

server_username is your username (root) on the server which you created and your_server_ip is the IP address of your server.

If no error shows up after running the ssh -L command.You’ll receive output with a URL. From a web browser on your local machine, open the Jupyter lab web interface with the URL that starts with http://localhost:8888.

SSH Tunneling with Windows and Putty¶

If you are using Windows, you can create an SSH tunnel using Putty. First, enter the server URL or IP address as the hostname as shown: 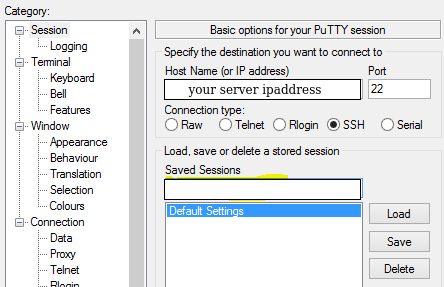 Next, click SSH on the bottom of the left pane to expand the menu, and then click Tunnels. Enter the local port number you want to use to access Jupyter on your local machine. Choose 8000 or greater to avoid ports used by other services, and set the destination as localhost:8888 where :8888 is the number of the port that Jupyter lab is running on. 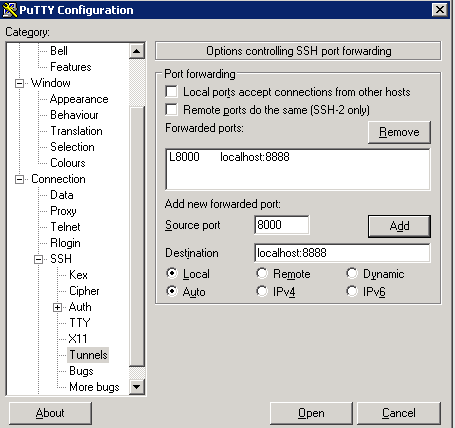 Finally, click the Open button to connect to the server via SSH and tunnel the desired ports. Navigate to http://localhost:8000 (or whatever port you chose) in a web browser to connect to Jupyter lab running on the server.