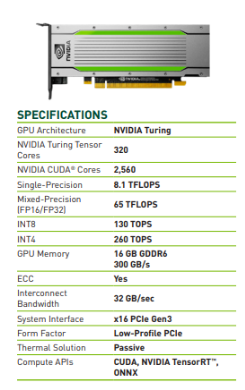 How T4 is advantageous for Inferencing Platform?¶

The Inference is less computationally intense but typically gets benefits from a GPU due to the massive amount of data GPUs can process concurrently.

Tesla T4 introduces NVIDIA Turing Tensor Core technology with multi-precision computing for the world’s most efficient AI inference. Turing Tensor Cores provide a full range of precisions for inference, from FP32 to FP16 to INT8, as well as INT4, to provide giant leaps in performance.

The T4 is the best GPU in product portfolio for running inference workloads. Its high-performance characteristics for FP16, INT8 and INT4 allow you to run high scale inference with flexible accuracy/performance tradeoffs that are not available on any other GPU.

T4 delivers breakthrough performance for deep learning training in FP32, FP16, INT8, INT4, and binary precisions for inference. With 130 teraOPS (TOPS) of INT8 and 260TOPS of INT4, T4 has the world’s highest inference efficiency, up to 40X higher performance compared to CPUs with just 60 percent of the power consumption. Using just 75 watts (W), it’s the ideal solution for scale-out servers at the edge.

As the volume of online videos continues to grow exponentially, demand for solutions to efficiently search and gain insights from video continues to grow as well. T4 delivers breakthrough performance for AI video applications, with dedicated hardware transcoding engines that bring twice the decoding performance of prior-generation GPUs.

NVIDIA Tesla T4 up to 38 Full HD videos streams, powered by a dedicated hardware-accelerated decode engine that works in parallel with the GPU doing inference. By integrating deep learning into the video pipeline, customers can offer smart, innovative video services to users that were previously impossible to do.

Make the Most From Tesla T4 GPUs on E2E Cloud¶

E2E Networks is the affordable cloud for companies looking to boost their AI game to the next level. Just when you needed it the most, E2E Networks is here to empower your company with the massive performance of Tesla T4 GPUs.

These features not only make E2E GPU Cloud services stand out from others in the market but it also helps you to stay ahead of your competition by outperforming them.

Take the giant leap in throughput and efficiency, and give the supercomputing powers to your AI/ML workloads with GPUs on E2E Cloud.

Get started, pick and choose your best GPU plan here