A Virtual Compute Node image is an image template that provides the functionality to launch new nodes instances from your saved images. The image backups can be saved as a customized image with updated configurations.

To save an image of a Virtual Compute Node it must be powered down.Click on the Power Off button.

Once the respective Virtual Compute Node is powered Off click on the ‘Save Image’ button under the Actions section.

Enter the Name for your Image and click on Save Image button.

A popup message will appear indicating that your image is being saved.

Note: All the management operations will be disabled on this node while the image is being saved.

To rename your existing image, click on the ‘Rename’ under the Actions section. “Change Image Name’ window will be open, you need to specify the new name and click on ‘Update Image’ button.

Click on the Launch Node ‘+ ‘ button next to the same image from which you want to create a node.

Select a plan of your choice from a wide range of suitable options for various requirements and proceed with creating your Node.

You can only create a same or a higher configuration node from your image.

All saved images are billed only for the disk space used i.e. at Rs. 4 per GB per month.(exclusive of 18% GST Rate).

Once you have selected the Node plan, then click the “Create” Button. It will take you to the final stage of the ‘Create Compute Node’ page. 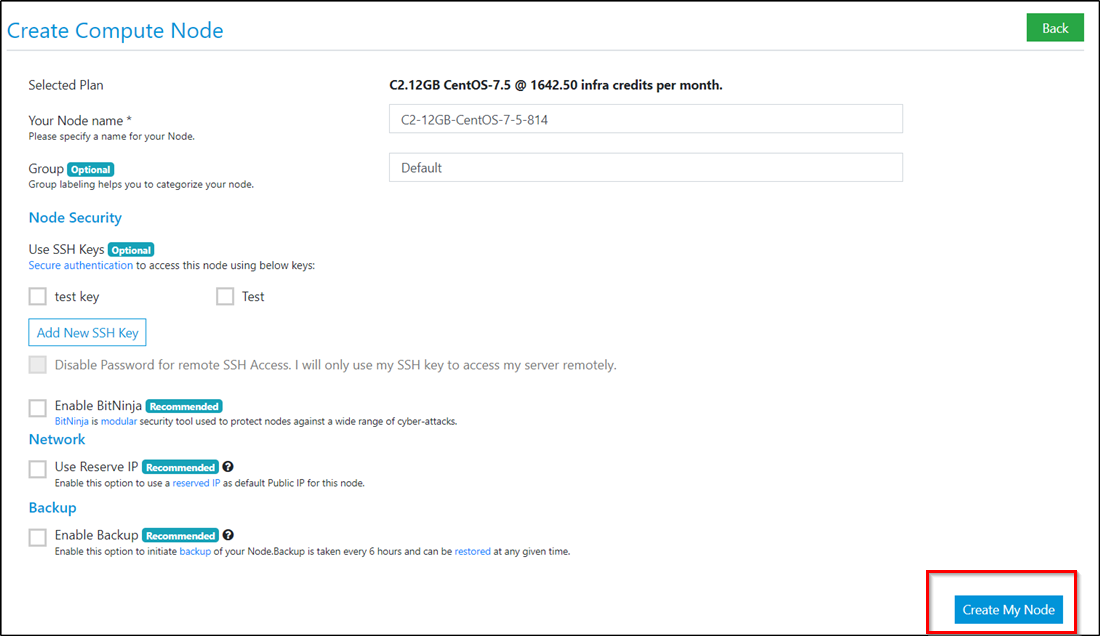 Here, you can specify the node name and additional options for the Node you’re creating.

Once you have selected your options, click Create. It will take a few minutes to set up the Node and you will take to the ‘Manage Node’ page.

To create a new scale group from the saved image, click on the ‘+ Create Scale Group’ under the Actions section.

Select a plan of your choice from a wide range of suitable options for various requirements and proceed with creating your scale group.

The compute node plan for the scale group can be different from the original plan used to create a saved image.

Once you have selected the plan, then click the “Create” Button. It will take you to the final stage of the ‘Create Scale Group’ page.